The silent human trafficking signal came to be after the CEO/ Founder of The Lifeboat Project, Jill Bolander Cohen, met with Rotarians in Central Florida. She was conducting a human trafficking awareness training to fellow Rotarians in her district. Sonya Hightower-LaBasco, a fellow Rotarian and the Executive Director at the Air Marshal National Council, approached Jill and suggested the urgency of having a universal signal that could be used world wide. Upon this request and from hearing stories of brave victims risking their lives to escape through other dangerous forms (such as leaving hidden notes for authorities or writing on bathroom mirrors), Jill began to ponder a solution that would not only keep victims safe, but would also work universally. The next day Jill came up with the solution. Flashing the letters “H” and “T” in American Sign Language. This would be the silent way to signal for help during any human trafficking emergency. By the signal being a silent call for help, this allows victims to be identified. Jill’s ingenious idea to use the signal to aid for rescue is monumental because many victims are unable to speak for themselves due to the control of their trafficker. This provides a way for victims to signal to other individuals around them. This silent signal can be the first step toward victims reaching safety. 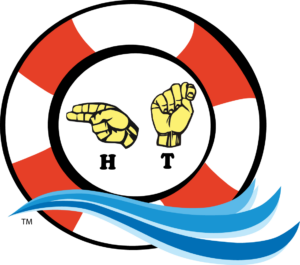 The signage below was produced in collaboration with our trained human trafficking emergency response team and survivors at The Lifeboat Project. Our hopes are to effectively spread awareness and education while preparing the public for safety and emergency response. This way, the public can be alerted and victims can be educated simultaneously.

Interested in putting our signage in you establishment?
PURCHASE